REVIEW: Game of Thrones – Season 8, Episode 4: “The Last of the Starks”

[This post contains full spoilers for S8:E4 of Game of Thrones]

After last week’s climactic Battle of Winterfell, nobody really knew where Game of Thrones would go. Sure, we assumed the story would move south to King’s Landing, but after defeating the White Walkers our characters are left in a strange spot: for many, that fight was the end. With the White Walkers gone, life could go on as normal. But with Cersei still on the throne, there was never going to be any respite. As Daenerys says in “The Last of the Starks,” they had won the Great War, but now it was time for the Final War.

“The Last of the Starks” goes back and forth between the very best Game of Thrones has to offer with the very worst, and does so frequently within its almost hour and a half runtime. The episode opens with a somber funeral scene for all the casualties of the Battle of Winterfell. This scene is a strong way to open the episode, delivering a few heartrending moments as the living say goodbye to the dead, with Dany giving Jorah one last embrace and Sansa placing the Stark sigil on Theon’s body proving especially moving.

From there we move to the feast “celebrating” their victory. This scene feels reminiscent of “A Knight of the Seven Kingdoms,” this season’s second episode. We’re treated to light-hearted character beats, such as Gendry being legitimized as a Baratheon (a clever move from Daenerys), Tormund being Tormund, and Jaime bonding with Brienne and Tyrion alike. This scene excels at giving us the character interaction we love, and what made the second episode of this season so brilliant, but as it goes on, it’s clear something isn’t right with Daenerys. She takes no part in the camaraderie and the episode shifts in tone.

Sure, we finally get the romantic scene that we’ve been craving between Jaime and Brienne (finally!), but there are more important matters to attend to. That’s the theme for the first half or so of this episode: none of this is as important as the writers seem to think it is. Like many others, I was drawn to this show by its characters, but at this point in the game, the plot needs to move forward. As if reading my mind, the episode suddenly sprints south, and things escalate quickly, possibly way too quickly 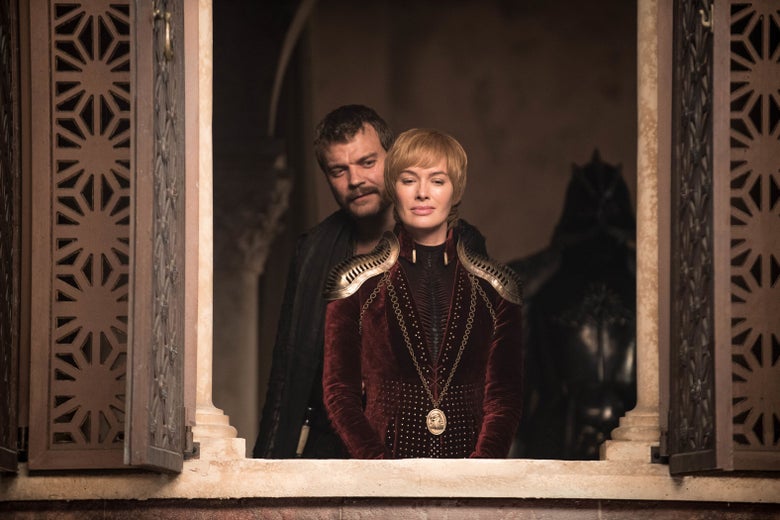 The back half of this episode is a rollercoaster, both in terms of tension and quality.

On one hand, you have scenes such as Tyrion and Varys’ treason chat, a remarkably well-written scene that gives us a taste of the political scheming that this series was built on. Their respective stances make sense and are in line with their characters, with the end of their conversation setting up a compelling split between Daenerys’ counselors.

On the other hand, you have Euron’s assault on Daenerys’ fleet and his slaying of Rhaegal. Not only does this feel like an ultra-convenient way to level the playing field (if dragons could be killed by an oversized ballista then how were they ever all-powerful to begin with?), but this is the second or third time Euron has swooped in out of nowhere to cause havoc and generally ruin Daenerys’ day. It feels like lazy plotting and is becoming a bit too common for this show in the home stretch.

Now, ridiculously convenient kidnapping of Missandei aside, the final showdown of this episode is thrillingly tense. Tyrion completely shuts down Qyburn and all his nonsense to approach Cersei on the ramparts directly. He makes one final effort to talk her out of slaughter and violence and is as passionate as we’ve ever seen him. However, we know Cersei would never back down, and executes Missandei in front of all (including Daenerys and Grey Worm) to send a message. Missandei’s final word is a defiant and spiteful “Dracarys,” which Dany hears loud and clear as she turns to retreat.

It’s clear where the writers are taking the show now, and the stage is set for one final battle. This episode does succeed in complicating who may sit on the throne at the end, though. Will Daenerys become the Mad Queen? What tricks do Cersei and Euron have up their sleeves? Will the Iron Throne even be standing by the time the credits roll for the last time?

We don’t have these answers yet, and while this episode takes more than a few stumbles in its approach, it does set up a thrilling conflict for Episode 5, and keeps the end mysterious. The only thing we can do now is sit back and watch everything burn.

Tags #Game Of Thrones #GoT #HBO #Sky Atlantic #The Last of the Starks
Film Trailers, Films

A24 Release First Trailer For Lulu Wang's 'The Farewell'

TV REVIEW: The Falcon and The Winter Soldier Episode 6 (2021)

Marvel Release New Trailer For ‘What If…?’ Animated Series