With the anniversary of last year’s smash hit God of War 4 (you heard me), I wanted to go back and replay the original game in the series. The one that started it all. Numero uno. Ye olde one. God of War. So let’s talk about it.

Kratos is a very angry man. Why is he angry? Was his wallet stolen? Did a politician say something dumb? Did he stub his toe? Well, no, he’s angry because ten years prior to the events of the game, he was tricked by Ares, the Greek god of war, into killing his own family. What’s lucky for Kratos is that the other gods are like “Yo, Kratos, Ares is totes being a dick, and we don’t like him, could you please kill him?”. So now he goes on a journey to take his revenge, with the luck of a divine carte blanche on his target. What I do like about the plot here isn’t just that it’s a big, bombastic, and epic tale of a very angry man going after the god of war, but it shows a surprising amount of nuance throughout using flashbacks to Kratos’ past, as well as his reminiscing about those events. People keep talking left and right about how Kratos/God of War is finally deep, and he wasn’t a real character back in ’05. Well, that’s just wrong. The plot here is really good.

So the gameplay of God of War is based for the most part around hacking enemies to bits, using Kratos’ blades of chaos, or the various spells at his disposal. The colorful face buttons on the Playstation controller are for dealing damage to enemies, be it in a light attack, heavy attack, or grab. The directional buttons switch out which kind of magic you want to use. But you can’t just use them willy-nilly, as you have a magic meter that will deplete as you use your various spells. You of course also have a health meter that depletes as enemies smack Kratos on his pale face. Luckily you can refill these meters through orbs that enemies might drop or through chests that can be found throughout the game. You can also extend them by finding a couple of collectables that are scattered throughout the game. 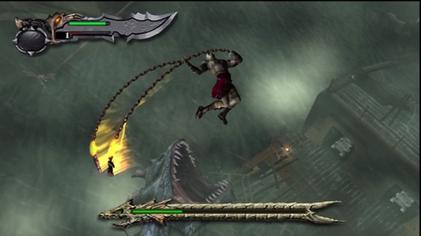 For the most part, the combat is really satisfying. The feedback you get as you tear down a bunch of enemies is a ton of fun and makes you feel like a real badass. However, there are a few issues, most relating to progression. As you move on throughout the game, combat encounters get more challenging (as they should). However, it’s not always fair, throwing tons of enemies at you at once, all with a seemingly ludicrous amount of health to them. Doesn’t help that the hitboxes in this game sometimes feel more like shitboxes. But let’s not dwell on combat, and move on to the other part of gameplay that I need to talk about… platforming. Oh yeah, there’s that too. Jumping works fine, climbing works fine, so what’s my issue? The camera. It’s a semi-fixed camera, kinda like Devil May Cry, which works fine in combat, but when you’re trying to tightrope around saw blades or jump across gaps or jump over traps, it can kind of screw you over. Makes a few bits a bit more of a hassle than they should be. Then there are bits that are kind of ass, but not because of the camera or any such thing, but rather due to someone clearly going a bit crazy in designing traps and hazards. So the gameplay is a bit of a mixed bag. Often fun, sometimes a burning pain in the neck.

In terms of presentation, this game still holds up quite well. The music is as big, epic, and brassy as you’d expect (it also has like seven composers listed, which is quite interesting). The graphics still hold up quite well to this day. Sure, whenever they switch between game engine and pre-rendered cutscene it can be a bit jarring, but it all is very impressive for a 2005 PS2 game not made by Square Enix. And the voice acting is quite great as well, with Terence “T.C.” Carson perfectly portraying the very angry Kratos. I also have to bring up Linda Hunt who provides narration for the game. I mean, there’s not much to say, she simply narrates the game, but her voice is so good, so I couldn’t help but bring her up.

So does God of War still hold up? For the most part, yes. A few design decisions and shitboxes do not work quite as well, but overall it’s still a good game. Not saying you should rush out and get it ASAP, but if you ever come across an old PS2 copy or the HD trilogy on PS3 for cheap, then sure, give it a go.

Have a good one.

REVIEW: Shadow Of The Tomb Raider

E3 Preview: Five Questions On My Mind Ahead Of This Year’s Event

COMPETITION: Win Season One Of ‘Wellington Paranormal’ On Blu-ray (UK)

COMPETITION: Win A Blu-Ray Copy Of ‘But I’m A Cheerleader – Director’s Cut’ (UK)