Synaesthesia is a neurological condition in which the stimulation of one sense causes a reaction in another. For example, some people who experience this phenomenon are able to associate certain tastes with specific colours or even smell words. To the non-synaesthetes among us, this may sound completely fabricated – but it is a genuine medical phenomenon.

The reason this is important to Rez is that the game’s creator, Tetsuya Mizuguchi, wanted to create a game that stimulated the senses in a synaesthetic way; though at its core, Rez is an on-rails shooter, the layers of sound, light and imagery that build up as players progress through the stages creates a deep level of sensory stimulation that is, in my experience, pretty much without equal in any other game or indeed, any other medium.

Rez was first released on Sega’s ill-fated, under-appreciated Dreamcast console in 2001. It was a late entry to the console’s library and didn’t reach the audience it deserved. Thankfully, Sega didn’t abandon the project – it was subsequently released on the PlayStation 2 and has seen numerous digital re-releases and HD updates over the years since, most recently with the release of Rez Infinite for PC and PS4. Though there have been upgrades in resolution and audio quality, the core gameplay and experience has – thankfully – never been altered. Rez Infinite does, however, have the notable addition of a VR level – which is an astonishing experience. 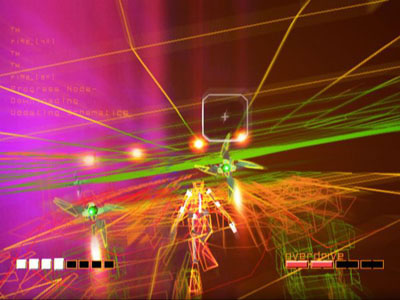 The premise of Rez is a basic one; the AI known as Eden has been overrun with knowledge following a viral infection – and it’s up to the player, beginning with an anthropomorphic avatar (which can be upgraded with power-ups collected from downed enemies – and also downgraded when hit – to sometimes surprisingly non-humanoid forms), to infiltrate the system, purge the hostiles and find Eden in an effort to restore her to her former glory.

Each stage is based around a specific electronic music track and visual aesthetic; for example, Area One (of five) takes place in an Egyptian-themed digital construct. As mentioned before, the stages start off with minimal visuals, wireframes gradually being filled in and flashes of light, colour and solidity being added as the player goes deeper into the system. The player character has a cursor which locks on to an enemy; release the button and the targeted antagonist is destroyed with an accompanying sound effect – however, up to eight enemies can be targeted at once, which builds up a cacophony of digital aural and visual feedback. It’s an incredibly simple concept, yet hard to describe to someone who hasn’t seen or experienced it in action. The overall effect on the player – created by the environment reacting – is a kind of sensory euphoria. It’s dazzling in practice, with some notably brilliant boss battles and an absolutely incredible climax in Area 5; the visuals reach a new level of dazzling surrealism, with swathes of organic life intruding upon the previously digital-only abstraction. Shout out also to Area 5’s musical accompaniment, Adam Freeland’s Fear – the exclusive edit heard here being, for me, the best version of the song that exists. There’s a section here where the player is bombarded by an Independence Day-esque mothership and smaller fighters, the soundtrack pumping out big beats and strings to create a gaming moment that – for me – is near-unmatched in any other game, in terms of intensity and excitement.

Unlike many games from the same period, Rez has aged beautifully – mostly likely because it has an incredibly unique blend of minimalist retro-futurism and straightforward gameplay which wasn’t constrained or influenced by the trends of its time. What surprises most about Rez is that the soundtrack, perhaps because it’s so deeply entwined in the experience, hasn’t aged a day. If you were to stumble across Rez for the first time today, you’d be forgiven for thinking that it’s an entirely new game.

Though there’s only five levels – and, depending on the version you have access to, a few extra bonus levels and even a mind-blowing VR level that has to be experienced to be believed – the replayability is near endless. The fusion of sound, visuals and gameplay is intoxicating and incredibly addictive; high score chasing is something I rarely do, but have indulged in this with Rez for several years at this point.

When you play Rez, make sure you turn it up as loud as you can, on the biggest screen available to you. Run it through big speakers and a subwoofer if possible. Get your rumble-enabled controller up to max. Dive into synaesthesia.