The PlayStation 2. What a magical little machine that is. Relatively powerful hardware, decent design, and the best game library ever. From first party exclusives to third-party support, few proved themselves to be as versatile and reliable as Sony’s sophomore outing in the gaming sphere. There’s a lot of games that I love on it that I could talk about, but I decided to go with one of my favorites for it. That game being Sly 2: Band of Thieves.

Right, quick backstory: In September of 2002, Sony published Sly Cooper and the Thievious Raccoonus (Sly Raccoon here in Europe), which had been developed by Sucker Punch (these days known for the Infamous series). It was about an anthropomorphic racoon named Sly Cooper who seeks revenge after a gang of crooks kills his parents and steals a valuable family heirloom; a book containing all the history and knowledge of Sly’s ancestors, who have all been master thieves. He traverses the world, beats the snot out of the baddies, and takes back what’s rightfully his. The leader of that bad gang proves to be the toughest nut to crack, as he’s a giant owl who’s replaced all his fleshy bits with robot parts. But in the end, Sly (with the help of some other characters) manages to beat the heavy metal bird (named Clockwerk). The second game picks up two years later, with Sly and his friends attempting to pull a heist on a museum where Clockwerk’s parts have been put on display, so he can steal them and destroy them. But when Sly arrives in the display room he finds out that someone else had stolen the parts before him. So after a daring escape from Interpol, he immediately goes to work in finding out who the hell have stolen the Clockwerk parts, which leads him to track down the Klaww Gang, who have spread out the parts amongst each other for… reasons. So now Sly and his two friends, Bentley (a turtle with a constantly stuffy nose) and Murray (a pink hippo) have to go on a globetrotting adventure to get the parts back before something bad happens… again. For a kid’s game about anthropomorphic animals, this game has a surprisingly layered plot, with twists, turns, allusions to drugs, and some overall dark moments. And that’s why I love it. It dares to push the boundaries of kid’s game storytelling while still keeping it fairly light and accessible to the kids. It reminds me of Batman: The Animated Series a bit in that aspect, which is why it’s always stuck out in my mind.

What kind of gameplay are we dealing with then? It’s kind of a stealth action platformer. You jump around and climb on stuff to get around while also sneaking around enemies, giving Snake a run for his money. Sly is a very nimble character, being able to climb on thin poles, vines, pointy rocks, and other items that only he can traverse in each of the levels. Sly is also able to fight his enemies, using his cane to smack the teeth out of their mouths. But that’s only for smaller guards, as the big ones with flashlights give him a lot of trouble. So instead of facing the guards that are bigger than Sly, you use the sneaky skills. The way that Sly 2 evolves things from its predecessor a bit too is that you don’t only play as Sly in it, as you’ll also get to take control of Bentley and Murray. Bentley is the weakest of the bunch, but he compensates for that by using various gadgets, including sleep darts, bombs, hacking skills, and a jetpack. And then we have Murray. He’s a big hippopotamus, which means that he can beat the shit out of anyone who stands in his way using his mighty muscles. The trio complements each other incredibly well in that sense, which makes it fun when the game switches between them during certain missions, letting you get full use of all of them. 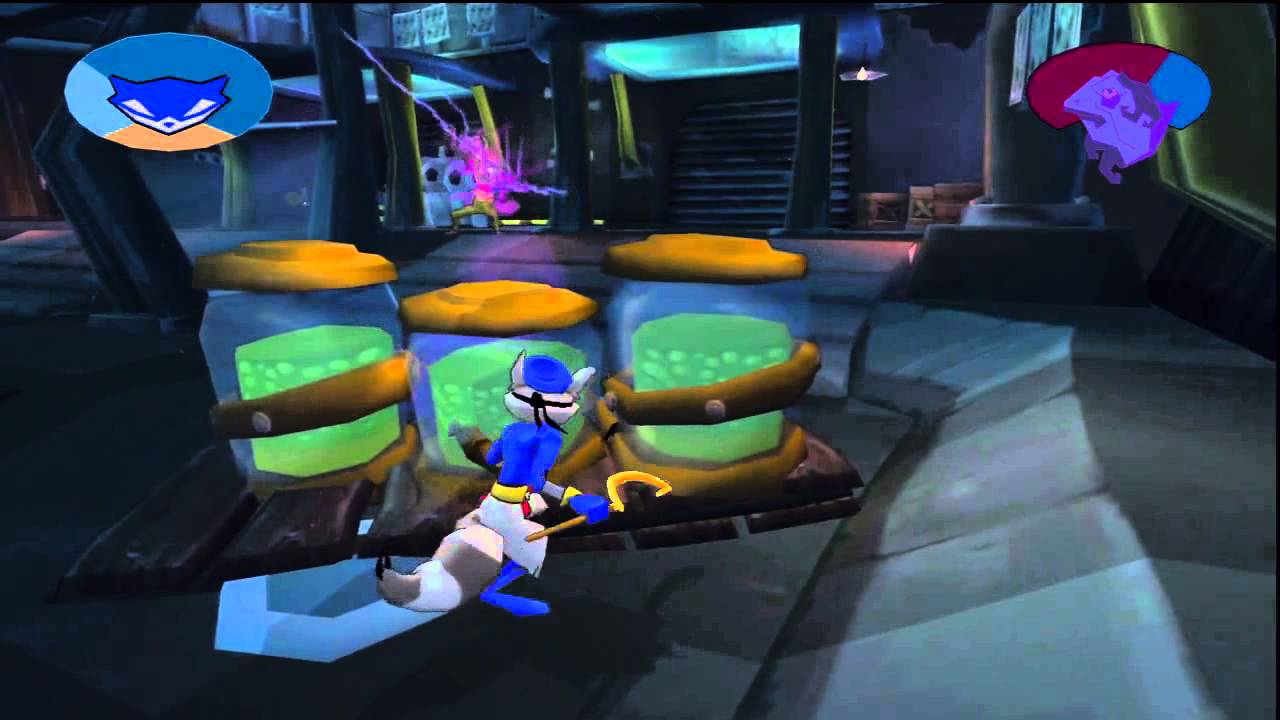 The game is divided up into episodes, and each episode contains a small open environment for you to explore. They’re big enough to give you a fair bit to check out, but not so big that you get lost and curse the gods. In these worlds, you’ll do missions, encounter enemies and level hazards, and find clue bottles that let you unlock a secret vault in each level. This makes the levels interesting too, as they then make you really explore and learn the layout of them. All aspects of the gameplay weave into each other to create a beautiful set of imaginative, challenging, and fun stealth-platforming.

The graphics of this game still hold up pretty well, you can tell that Sucker Punch really took the time to refine it after the first game’s graphics could be seen as a bit… rough (my god, Sly’s jaw). But here they nailed it, with a sleek style that fits 3D environments while also really capturing the look of a comic book/cartoon series. And the music by Peter McConnell is something that holds up incredibly well too, not only creating catchy, memorable tunes for us to listen to, but that also really capture the feel of each place that our gang of lovable rogues visit. I’m particularly fond of the Paris music, but I also have a soft spot for some of the Canadian stuff too. It really helps give each level its own vibe while stile weaving certain motifs in to give a sense of familiarity. In terms of presentation, this game is still one of the best of its generation. And the voice acting is perfect too. Cartoony, yes, but so is the entire concept of the game, so it fits perfectly.

So as you probably got from my ramblings, I still love Sly 2: Band of Thieves. It’s a sequel that improves on pretty much every aspect from the first game while also bringing in a lot of new elements. It’s fun, engaging, cool, funny, weird, and just overall a great game that I happily call one of my favorites, not just on the PS2, but of all time.

The Avengers Suit Up In New 'Endgame' Trailer

GLASGOW FILM FESTIVAL 2019: Out Of Blue