A Tribute To… Mashed

It’s easier than ever to feel old when we have access to any information we want, with the only delay being the speed at which our increasingly ageing fingers can bring themselves to use Google. The PS2 is nineteen years old – nearly two decades have passed since Sony’s DVD-based console was launched. That’s an incredible and frankly terrifying length of time – to put it in perspective, it’s 133 in dog years, which itself is less than half the combined age of The Rolling Stones (the current line-up’s combined age is 298, fact fans – with just four members!).

In researching this piece about one of my most beloved gaming experiences, I discovered that Mashed, the simple, local multiplayer focused top-down racer I first encountered on the PS2, is now fifteen years old.

Fifteen years! That’s an incredible amount of time to have passed – and, despite not being the most technically proficient game even at the time of release – the years have been kind to Mashed.

Let me back up a bit though. I admit, it’s hardly the best-known game to have graced the PS2, which has an absolutely astonishing number of classic triple-A, famous titles in its library, but the reason I’ve chosen it as my PS2 game of choice is simple – I don’t think I played any other game or had as much fun overall, as I did with Mashed.

Mashed came out in 2004 and even then felt like a throwback to games such as Micro Machines or its spiritual successor on the PS1, Supersonic Racers – with good reason. Developed by Supersonic Software – who were also responsible for the aforementioned games – and published by Empire Interactive, Mashed took a different graphical approach to both Micro Machines and Supersonic Racers; rather than looking cartoony or toy-esque, it had a somewhat realistic look (though it wasn’t exactly endowed with state-of-the-art graphical wizardry, even at the time). The game played remarkably similarly, however, with a top-down camera view and numerous crazy weapons, along with a focus on four-player battles. The PS2, having only two controller ports, needed a multitap in order to allow for four-player carnage – but it was well worth investing in one just to enjoy Mashed to the fullest. 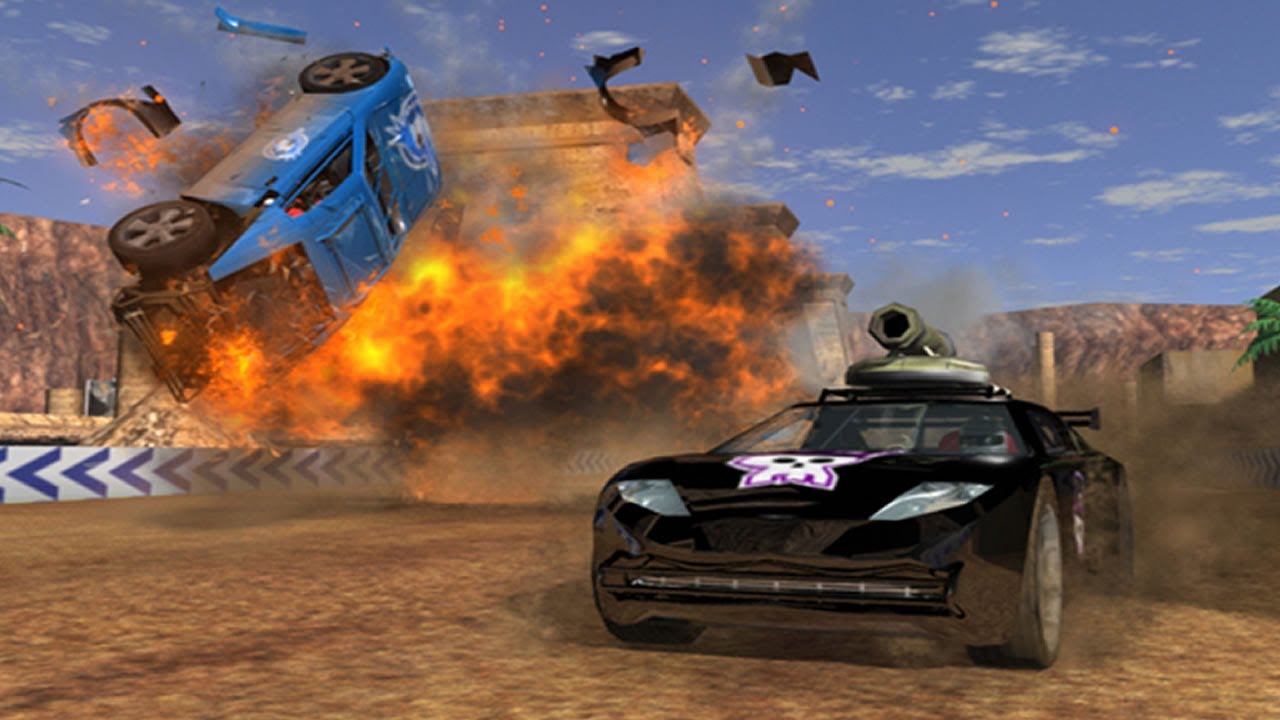 The idea behind the main mode was simply to get so far ahead of your opponent(s) that they disappeared offscreen – if you were the last car in view, congratulations: that’s a point to you! Play to a certain number of points to be crowned the winner – simple.

There was a single player mode that had varying objectives and bronze, silver and gold medals to win – as well as the final track to unlock – but this was a token inclusion. I very much doubt that anyone picking up Mashed would have done so for the single player alone.

Local multiplayer is something that seemed to have been relegated to history in recent years, as games publishers seemed to deliberately move away from split-screen or same-screen co-op/vs modes in favour of online; after all, if you’re going to have four friends play your game in a group, it does make financial sense for a publisher to sell four copies of the game instead of just one. I get that, I really do; but it’s hard to express just how much fun has been lost in the process. I grew up playing games with my friends – my teenage years (and early 20s) were spent playing Super Mario Kart, then moving on to four player Super Bomberman, Mario Kart 64, Goldeneye, Diddy Kong Racing, Perfect Dark and more. Mashed was, for me, one of the last, great four player gaming experiences on a ‘traditional’ console; yes, Wii Sports came later and the Wii itself played host to plenty of amazing multiplayer experiences – but they rarely felt or had the same edge as the aforementioned competitive games.

There’s something about that experience, with friends in the same room – the laughing, the shouting at the TV, the swearing when things go wrong – that you just don’t get when playing online with random people. Even when playing with your friends online, it isn’t the same as having them in the room, seeing and hearing their reactions in real time. That and the copious amounts of pizza you can consume together.

The hilarious vehicular carnage of Mashed, with OTT weapons and arcade style – rather than realistic – physics, brought me, my friends and even work colleagues (we set up a PS2 in the office and had four player matches every lunchtime for months on end!) so much joy, laughter and turn-the-air-blue road rage, for such a long time. It wasn’t what I’d call a casual game, but it was still easy for almost anyone to pick up and play. It was a barebones game, sure, but it was clearly built with care in the most important area that mattered – gameplay. It was tuned to perfection, gameplay-wise; Supersonic clearly focused all of their attention on getting the maximum amount of fun out of the classic race, chase and destroy formula.

It’s a shame that games like this, for the most part, seem to belong to a bygone age – or at least they did until very recently. Sony and Microsoft’s consoles are very online focused – and have been since the 360’s brilliant Xbox Live service came to our consoles (though it first arrived on the original Xbox, it wasn’t until the 360 that consumers were really ready for it). Nintendo’s Wii, as mentioned, did strive to keep local multiplayer alive, but it was at the expense of ‘traditional’ gaming experiences. The Wii U, for those who experienced it, was home to several exceptional multiplayer games – but the console itself sold so little that these experiences didn’t get the audience they deserved.

Nintendo’s Switch, however, seems to have really brought local multiplayer back to the living room in a big way – games such as Mario Kart 8 Deluxe are a brilliant throwback to the glory days of the 90s and 00s.

In case you were scratching your head about where we’ve ended up at the end of this piece (though you’d have been forgiven for scratching your head when we started too), I have an ulterior motive for my sidestep to talking about Nintendo (in an article that is, after all, supposed to be about my love for a PS2 game): the Switch would be a great home for Mashed. If you’re listening, Supersonic Software: I think the stars are aligned – the time is most definitely right for the undisputed king of top-down, addictive, multiplayer racing insanity to make a comeback.

E3 is Dead, and We Should Not Mourn It