Christmas comes early this Box Office weekend, with ‘The Grinch’ hoping to snatch any holiday cheer away from the other movie hopefuls. The animated remake of ‘How the Grinch Stole Christmas’ from 2000 (itself based off of Dr. Seuss’ 1957 book) features the voice of Benedict Cumberbatch in the lead role, alongside Rashida Jones, Kenan Thompson, and Cameron Seely.

Illumination Entertainment, the creators of the ‘Despicable Me’ and ‘Minions’ franchise (as well as ‘The Lorax’, ‘The Secret Life of Pets’, and the incoming ‘Shrek’ reboot), helm this on behalf of parent company Universal, and kept the budget down to a respectable $75m. Such is the skill of the company’s production team that none of their films have ever cost more than $80m (that being last year’s ‘Despicable Me 3’).

In comparison, rivals Pixar’s latest offering ‘Incredibles 2’ earlier this year cost a whopping $200m. This hasn’t stopped Illumination from raking in the cash – both ‘Despicable Me 3’ and ‘Minions’ topped $1bn worldwide, and although ‘The Grinch’ probably won’t hit these heights, we’re still expecting big numbers.

Its so-so 65% on the Tomatometer won’t dampen audience excitement for this, although previous weeks of kid-friendly cinema might. In the past month alone, U.S. cinemagoers have been treated to ‘The Nutcracker’, ‘Goosebumps 2’, and ‘Smallfoot’, which may have already scratched the necessary itch.

Regardless, we’re being more optimistic so while ‘Despicable Me’ opened to $56.4m in 2010, we at JUMPCUT forecast around $66m, just below that of 2012s ‘The Lorax’, Illumination’s other Dr. Seuss adaptation ($70.2m). ‘The Grinch’ will surely then get off to a bright start by Sunday evening, and although it may not be stealing the hearts of critics, it’ll have no problem taking first place in the Box Office.

Of course, ‘The Grinch’ isn’t the only new release this weekend. J.J. Abrams and Paramount release ‘Overlord’, an action-horror set in WW2-stricken France. A big question surrounding this film is its link to the ‘Cloverfield’ franchise, and while Abrams has denied it in the past, the creepy alien/monster theme from the previous ‘Cloverfield’ films continue to rear their head(s) in this one.

‘Overlord’ is directed by Julius Avery and follows American soldiers (played by Wyatt Russell, Jovan Adepo, John Magaro and others) who discover secret Nazi experiments taking place during the war. Critically, it’s a hit, with 89% on Rotten Tomatoes, and can also take solace in the fact that its audience couldn’t be further away from this weekend’s big hitter ‘The Grinch’s if it tried.

The R-rated horror does however come with a somewhat-hefty $38m budget which, when compared to some of the horrors we’ve seen recently, is a bit bloated. Still, the film has a good chance of opening strongly, especially in the face of nearest competitor ‘Halloween’s recent woes (it fell a massive 66% last weekend). We’re thinking a $20m-ish 3-day start, a solid opening for such a budget.

The Girl in the Spider’s Web’ has a similar budget of $40m, but won’t share ‘Overlord’s Box Office success this weekend. Sure, it has the brand loyalty that comes with ‘The Girl with the Dragon Tattoo’ book franchise, but considering the last film opened to just $12.8m (although ended at $232.6m worldwide) and starred Rooney Mara, not Claire Foy, as Lisbeth Salander, we can’t see a major shock happening hee.

‘Spider’s Web’ stars Foy as Salander, a computer hacker who tries to rescue and seek vengeance for women who’ve been victims of violence. It also features LaKeith Stanfield, Sylvia Hoeks, and Stephen Merchant, a completely new cast from the 2011 prequel directed by David Fincher and starring Mara and Daniel Craig.

Now helmed by Fede Álvarez (2016s ‘Don’t Breathe’) and produced on half the budget after Sony decided to go for a soft reboot (after the 2011 film was itself a reboot of a Swedish trilogy starring Noomi Rapace), ‘Spider’s Web’ will aim to open in the region of $10m. While its predecessor opened during the Christmas holiday period and benefited from ‘The Greatest Showman’-like legs, ‘Spider’s Web’s performance will now almost entirely depend on a good audience reception in coming weeks.

Finally, we have ‘Beautiful Boy’ starring Steve Carrell and Timothee Chalamet. The drama is ramping up its cinema count by 300 to 840, and should earn just $1.3m to keep it outside the top ten.

Four new wide releases but one clear winner: ‘The Grinch’. Is Illumination becoming a serious competitor to Disney/Pixar? Let us know your thoughts on Twitter and Instagram – we’re at @JUMPCUT_ONLINE. 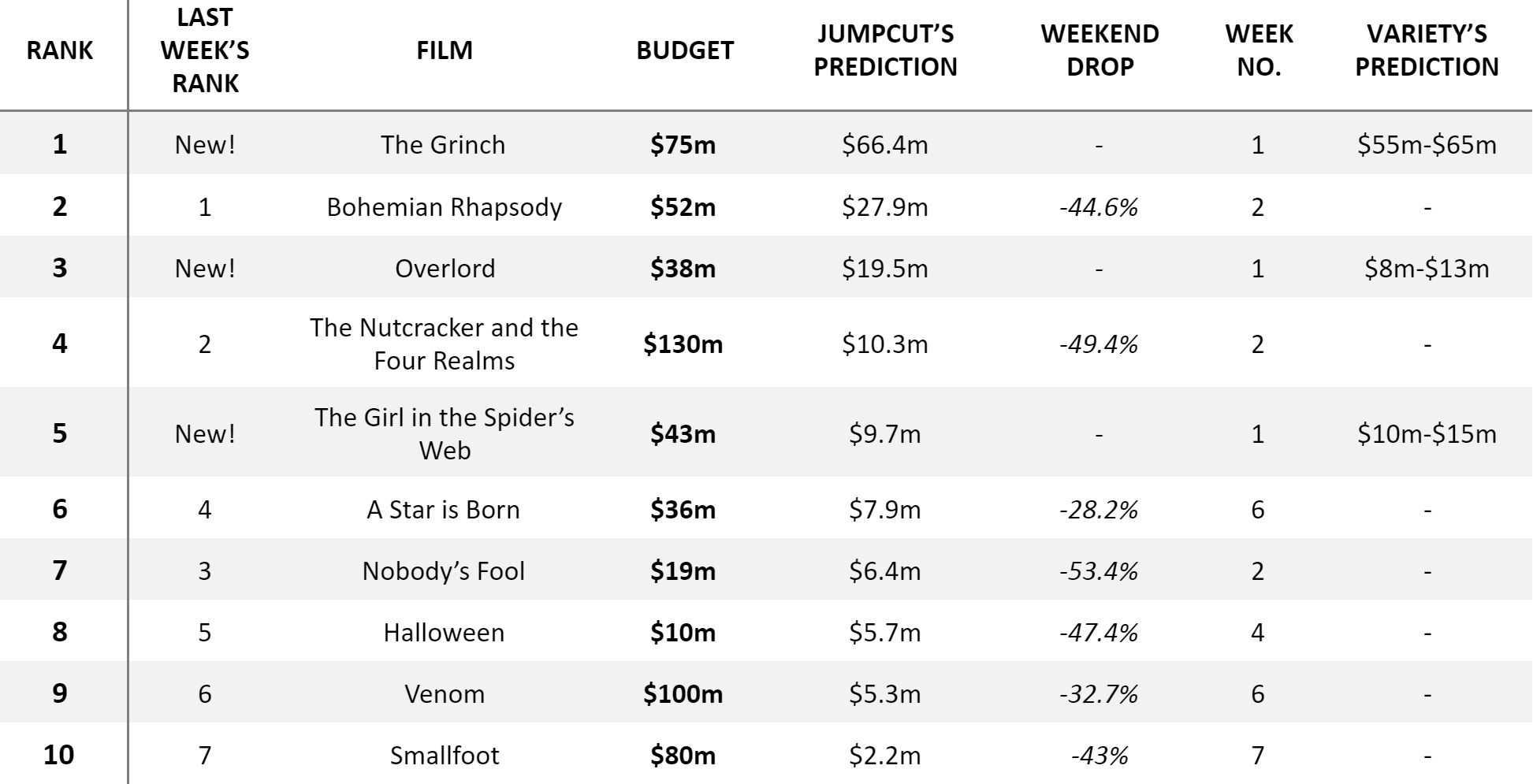 Sarah Connor Is Back In First Teaser Trailer For ‘Terminator: Dark Fate’

‘Spider-Man: Into The Spider-Verse’ To Swing In With $50m, While ‘Mortal Engines’ Can’t Get Started: Box Office Predictions