Not since 9th February have we seen all three new wide releases finish on the podium in a Box Office weekend. That weekend, ‘Fifty Shades Freed’, ‘Peter Rabbit’, and ‘The 15:17 to Paris’ took home the medals for Universal, Sony, and Warner Bros. This time around, the other half of Hollywood’s big six studios delivered the goods, as Fox’s ‘Bohemian Rhapsody’, Disney’s ‘The Nutcracker’, and Paramount’s ‘Nobody Fool’ earned $51.1m, $20.4m, and $13.7m alike to top the charts.

We kick things off with Rami Malek’s ‘Bohemian Rhapsody’, which beat our optimistic $45m forecast by grossing just $1m less than its entire budget. Of course, this doesn’t mean it’s already broken-even, but considering the $73m earned from overseas 64 markets this weekend (and the $12.5m already brought in from the U.K.’s early release) giving the Queen biopic a royal worldwide total of $143m, it’s surely close.

‘Bohemian Rhapsody’ follows Freddie Mercury (Malek) and the rise of rock band Queen from 1970 up until the famous Live-Aid concert of 1985. Understandably, its opening weekend audience reflected the time period, with 78% being over the age of 25. Gender wasn’t nearly as skewed however, with women slightly edging the split with 51%.

The hope now is for a strong Box Office run in the face of little upcoming competition. ‘Bohemian Rhapsody’, Fox’s 2nd biggest opening of the year (behind ‘Deadpool 2), will now look towards recent music-centric movies like ‘Mamma Mia 2’ and ‘A Star is Born’, which have gone down like a treat with cinemagoers, earning $120.8m and $165.5m each. A performance like ‘Mamma Mia 2’s would see the film finishing a little over $170m; a real possibility considering its ‘A’ on Cinemascore, and surely a welcome one for a studio whose only hits this year come from the aforementioned ‘Deadpool 2’, and ‘Maze Runner 3’.

While ‘Bohemian Rhapsody’ over-delivered this weekend, ‘The Nutcracker and the Four Realms’ neutralised any possible Box Office-forecast gains, bringing in a paltry $20.4m. It didn’t fare much better internationally, earning $38.5m for a $58.5m worldwide start. The story here lies in an over-inflated budget of $130m, partly caused by a production that saw over a month’s worth of reshoots, resulting in the film having two directors, with Joe Johnston receiving a credit alongside Lasse Hallström.

It wasn’t just this that doomed the film – a $20.4m start would barely suffice for a film costing half that amount. Its poor release date (too early for Christmas, too soon after a series of PG competitors) is compounded by the fact that two more Disney releases in ‘Wreck it Ralph 2’ and ‘Mary Poppins Returns’ open by the end of the year, as well as ‘Dr. Seuss’ The Grinch’ and ‘Fantastic Beasts 2’ hitting cinemas in the next week, which should all stop any possibilities of ‘Nutcracker’ becoming a sleeper hit.

To make matters worse, its 34% on Rotten Tomatoes was backed up by an average ‘B+’ on Cinemascore. At best, it can hope for legs like another Disney bomb ‘A Wrinkle in Time’, whose 3x multiplier would give ‘Nutcracker’ a domestic total of just $61m.

It continues what’s been a strange year for Disney. On one hand, they’ve released record-breakers in ‘Infinity War’, ‘Black Panther’, and ‘Incredibles 2’, but also some of the biggest flops in recent history in ‘A Wrinkle in Time’ and ‘Solo’. ‘The Nutcracker’ is surely added to the latter pile, which Disney hopes to keep at just 3 films for the rest of the year.

We’ve had a hit, we’ve had a flop, now for somewhere in the middle. In third place this Box Office weekend was Tyler Perry’s latest foray, ‘Nobody’s Fool’. Made on a $19m budget and earning $14m in its 3-day debut, ‘Nobody’s Fool’ met its estimates and but never really exceeded its expectations. Perhaps it was the lack of ‘Tyler Perry’ (or ‘Madea’) in the title, or the adverse effects of having Tiffany Haddish lead yet another comedy (‘Night School’ is still out in 1,300 cinemas), but could this have grossed more?

Probably not. Let’s not forget, this is a solid start for the R-rated comedy, whose gross is just a little under that of this year’s ‘Tag’ ($14.9m), but comfortably above ‘The Happytime Murders’ ($9.5m). Paramount will hope the film is less like previous release ‘Action Point’ ($2.4m opening, $5.1m domestic total) and more towards ‘Book Club’ ($13.6m opening, $68.6m domestic total), although its poor critical reception threatens any real chance of such a leggy run.

Three new films slot into the top three slots. How far can ‘Bohemian Rhapsody’ go? How badly will ‘The Nutcracker’ do? Let us know your thoughts on Twitter and Facebook – we’re at @JUMPCUT_ONLINE. 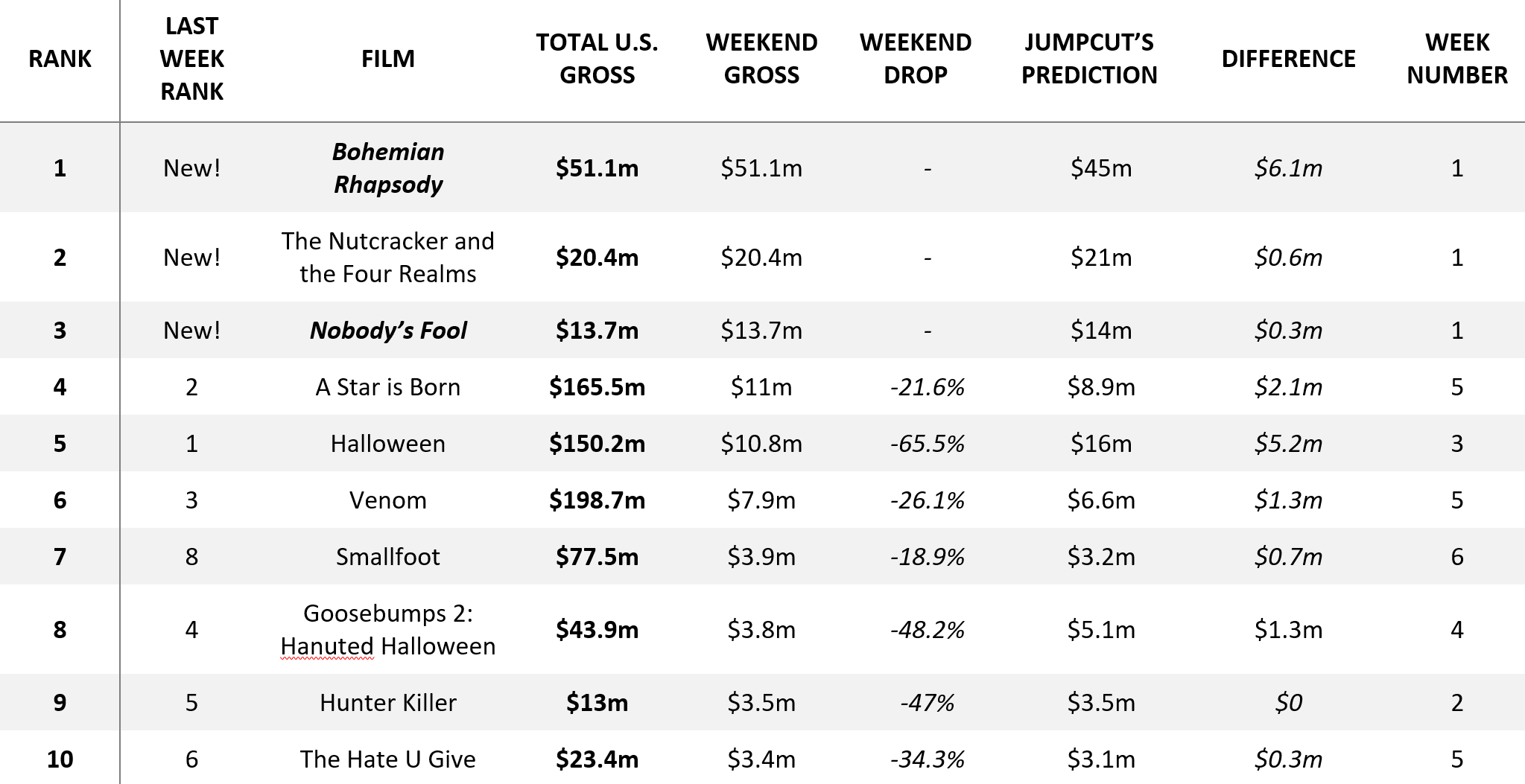 'The Max Trailer' Released For 'The Secret Life Of Pets' Sequel

Weekend BO Report: ‘Ant-Man And The Wasp’ Flies To Number 1 On A Weekend Of Big Drops