There’s going to be a battle for third place in the U.S. Box Office this weekend as sports comedy ‘Uncle Drew’ looks to play ball against ‘Sicario 2’, the eagerly awaited sequel to Denis Villeneuve’s 2015 crime thriller ‘Sicario’. Both will take a backseat to J. A. Bayona’s ‘Jurassic World: Fallen Kingdom’ however, with the dinosaur epic looking to endure a more frustrating run than its 2015 predecessor. A drop close to 60% would still earn ‘Jurassic World 2’, the 3rd biggest film of the year so far, a pretty monstrous $60m, but it’s a far-cry from the $106.6m that Trevorrow’s ‘Jurassic World’ made just 3 years ago.

‘Incredibles 2’, on the other hand, is rapidly closing in on ‘The Incredibles’ worldwide total of $633m, as it looks to break through the $600m barrier by the end of the weekend. Domestically, a $45.8m gross this weekend would see it keep second place and near a $450m total, enough to become the second biggest animated film of all time in the U.S.

Stefano Sollima’s ‘Sicario 2’ can only wish for a similar performance – the first only opened to $12.1m in wide release, for a $46.9m domestic total off of a $30m budget. Director Denis Villeneuve doesn’t return this time around, alongside household name Emily Blunt, and Oscar-nominee Daniel Kaluuya. It does though see the return of Josh Brolin and Benicio del Toro, alongside acclaimed writer Taylor Sheridan of ‘Wind River’ and ‘Hell or High Water’ fame. An opening close to $20m would be a solid start, but critical reception pales in comparison to ‘Sicario’, with the sequel holding a decent 72% on the Tomatometer, compared to the first’s 93%. A gross just over $16m should therefore be on the cards.

Following closely is ‘Uncle Drew’, starring NBA superstar Kyrie Irving in the titular role. The comedy, based on his character from Pepsi Max adverts, also stars ‘Get Out’ actor Lil Rel Howery, as well as Nick Kroll, Shaquille O’Neal, and Tiffany Haddish. The presence of Haddish automatically draws comparisons between the film and last year’s breakout comedy ‘Girls Trip’, which opened to huge $31.2m, and finished on $115.2m domestically. However, ‘Uncle Drew’ doesn’t have the critical acclaim (50% on RT vs. 90%), nor the specific charm that ‘Girls Trip’ offered. A closer comparison would be to 2016s ‘Barbershop: The Next Cut’s $20.2m opening, meaning ‘Uncle Drew’ should be close to ‘Sicario 2’ this weekend by earning around $16m.

Also keeping its place in the top ten is ‘Ocean’s 8’ which looks to close in on ‘Ocean’s Thirteen’s domestic total with a $7.5m gross this weekend. Comedy ‘Tag’ may endure a bit of audience competition from the two new entries, and should earn just under $5m to continue a pretty poor year for comedies. ‘Deadpool 2’ sets to continue its trend of 40% weekend drops by pulling in $3.2m, while ‘Solo’ in theory should bounce back after being hit hard by ‘Jurassic World’ 7 days ago, for a gross of $2.7m. Finally, we round the weekend out with ‘Won’t You Be My Neighbor?’ and ‘Hereditary’; the former looks to perform similarly to documentary ‘RBG’ earlier this year to earn $1.9m from its limited release, while the latter will pull in close to $1.8m.

Who do you think will win the battle for third place between ‘Sicario 2’ and ‘Uncle Drew’? Let us know your thoughts on Twitter and Instagram – we’re at @JUMPCUT_ONLINE. 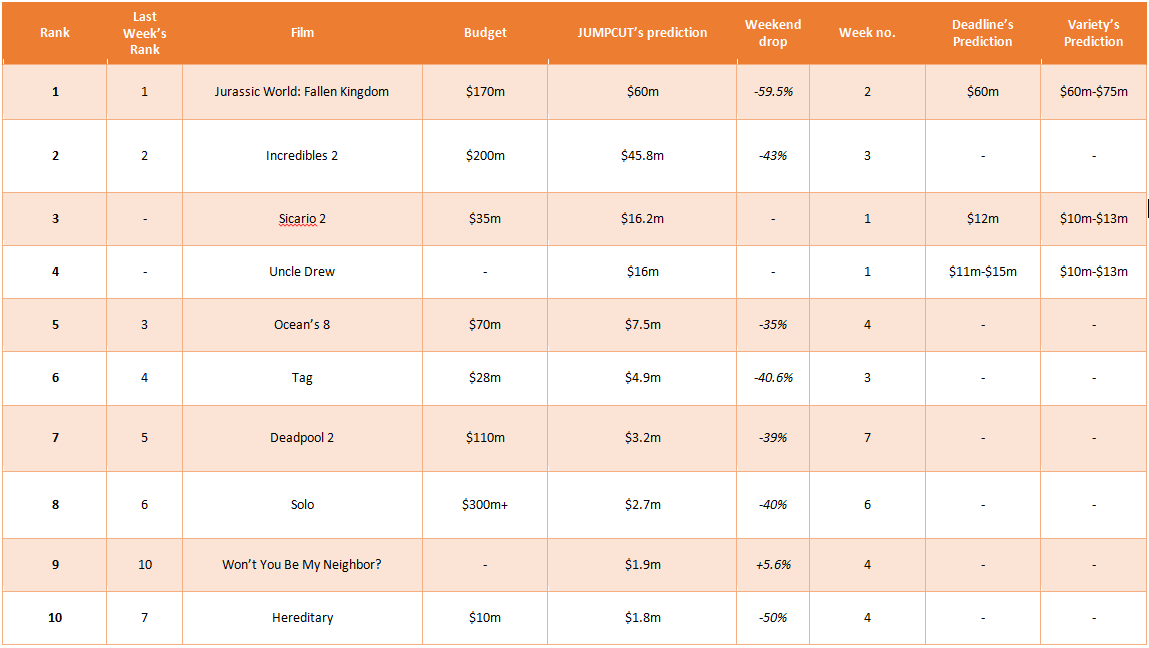 Weekend BO Predictions: ‘Fahrenheit 11/9’ Trumps ‘Assassination Nation’ As ‘The House With A Clock In Its Wall’ Earns $20m+

‘Spider-Man: Into The Spider-Verse’ To Swing In With $50m, While ‘Mortal Engines’ Can’t Get Started: Box Office Predictions