Disney released a press kit earlier today with a whole load of goodies for film fans, including new stills from ‘Ant-Man and The Wasp’, ‘Mary Poppins Returns’, and ‘Incredibles 2’. You can check out some of these stills over on our Twitter feed!

Also released was a new synopsis for Ron Howard’s upcoming Han Solo centered ‘Star Wars’ spin-off! It doesn’t offer much up in the way of plot details, but we do know Han will meet Chewbacca for the first time, and we’ll also witness his first encount with Lando Calrissian, who will be played by Donald Glover.

“Board the Millennium Falcon and journey to a galaxy far, far away in ‘Solo: A Star Wars Story’, an all-new adventure with the most beloved scoundrel in the galaxy. Through a series of daring escapades deep within a dark and dangerous criminal underworld, Han Solo meets his mighty future co-pilot Chewbacca and encounters the notorious gambler Lando Calrissian, in a journey that will set the course of one of the ‘Star Wars’ saga’s most unlikely heroes”

There doesn’t seem to be much excitement for this film, which for the most part is because no one asked for it! We want to know.. are you remotely excited to see Alden Ehrenreich and co. show us a young Solo and his shenanigans before running into Luke Skywalker? 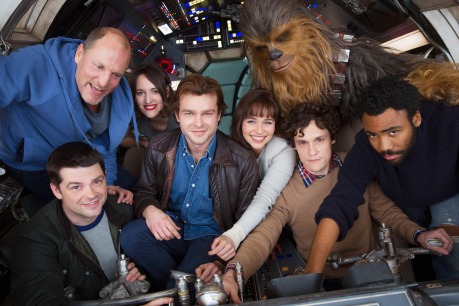 Move Over Justice League, The Teen Titans Are Ready For Their Shot In New Trailer For ‘Teen Titans GO! To The Movies’

SDCC: First Trailer For ‘Godzilla: King Of The Monsters’ Stomps Its Way Online!